While central bank digital currency (CBDC) is the focus of heady debate, many nations have already embraced the benefits, with nine actively implementing CBDC according to The Atlantic Council. On 13 January, the UK House of Lords weighed in, and questioned the case for a British CBDC. It is true that the UK, with its largely cashless economy, has a robust, low-cost digital payments system for domestic transactions. Few of us carry cash anymore. Instead, we use cards and digital wallets to pay for goods and services, and enjoy a range of consumer protections. We easily send money to UK-based friends and businesses. However, the benefits of a well-implemented CBDC go much further than this, and the UK risks missing out.

The US Federal Reserve certainly agrees. On 20 January, it issued its paper, CBDC: Money and Payments in the Age of Digital Transformation with a well-balanced, considered view on potential adaptation. It left room for different possibilities. Perhaps, a US CBDC will not emerge as an all-encompassing solution, like the one currently being trialled in China, that displaces retail banks and cash, but as a hybrid solution that dovetails with our expectations for privacy, security, financial inclusion and regulation.

CBDC implementation may not be a one-size-fits-all approach. Some countries are starting the process with wholesale stablecoins which may evolve to  become a CBDC; while others, including emerging economies, may be better placed to leapfrog this structure with their central banks taking a more prominent role to govern policy and issue retail digital assets into their domestic systems.‍

Significant advantages to security
Blockchain technology is immutable and highly secure. CBDCs would be built on technology that leverages cryptographic chains, which are nearly impossible to tamper with. The trust of the financial system is based on resilience and managing risk, including cybersecurity risk. We must ensure that the existing controls that operate critical national infrastructure such as payments infrastructure are extended and applied to blockchain-based and decentralised payment solutions. Security needs to evolve to protect distributed networks and digital asset payment instruments. The three cybersecurity pillars of Confidentiality, Integrity and Availability must also bridge to the new digital asset infrastructure to provide assurance and manage risks.

It is possible to build a successful model for CBDCs that meets these security requirements and is interoperable with private and public blockchains. Furthermore, this design can be securely integrated with our existing financial systems.  Data that traverses the old and the new infrastructure can be ring-fenced, encrypted and difficult to tamper with or disrupt.  ‍

Protecting individual privacy
A commonly quoted argument against a CBDC, and a serious obstacle to public acceptance, is the issue of privacy. CBDC payments, so the reasoning goes, leave a data trail that can be used to create a detailed history of a person’s spending history and circumstances. By implementing a CBDC, individual citizens would be denied the right to engage, privately and anonymously, with the economy.

It’s incorrect to assume that loss of privacy is a prerequisite for a CBDC. Current distributed ledger technology makes it perfectly possible to collect all the information required by money laundering and know your customer regulations without compromising anonymity. It is a matter of system design. A perfect example of this is the LACChain regional programme, which utilises Quant’s technology to ensure that transactions are anonymised and behave essentially like cash.

Financial inclusion and extending value chains
CBDC can help digitise value chains in the economy. Economic activities done offline with cash are ripe to be carried out with a CBDC. Banks, retailers and other service providers could develop low cost, bespoke digital services via an API for people who opt-in, much like in Open Banking. CBDCs could be designed to function offline in remote areas and places with low broadband coverage. Finally, a CBDC could lower the cost of small international payments; for example, there are fantastic use cases for merchant seamen or itinerant workers to reduce the fees associated with wiring money home to their families.

Financial infrastructure for future resilience
It is vital to keep evolving our financial infrastructure so it doesn’t become obsolete. Quant is committed to blockchain standardisation, helping establish the ISO/TC 307 Blockchain ISO Standard in 2015 and chairing the blockchain interoperability working group WG7. Standards like this, combined with a practical regulatory framework, ease the route to adoption. The UK should consider that whilst our domestic payments function well enough, we could be eclipsed by other countries adopting CBDC, which would stifle GDP growth.

Spurring innovation and economic growth in the UK
In 2018, the European Commission issued the Second Payment Directive (PSD2) to help modernise payments in Europe, lower cost and spur innovation in banking and Fintech. As a result, banks and payments companies implemented a host of changes to the way payments are made and accepted. The UK took this one step further and implemented Open Banking, where leading banks released and anonymised customer data so that fintech companies could develop low-cost, customized solutions for consumers.

Much in the same way as for PSD2 and Open Banking, should the UK adopt CBDC, there is a clear opportunity to spur British economic growth and innovation as a global leader in Fintech.

Adopting a worst-case position on the desirability of a CBDC is a dangerous path. It rejects many of the clear benefits that a CBDC can deliver and accepts a negative view of how the system could backfire. It also denies our current reality. Today, the trend towards cryptocurrencies and commercial stablecoins is all but unstoppable. Sooner rather than later, we will need to regulate such mechanisms and decide whether or not to launch a UK CBDC.

The benefits described above do not negate the fact that a CBDC presents significant challenges. However, these risks can be managed and mitigated to benefit the UK significantly. By taking a broad and measured approach to assessing the CBDC design requirements, the Bank of England can ensure that the UK gets the best rather than the worst from a digital currency.

For more on this topic, download our 'Implementing a CBDC' white paper" 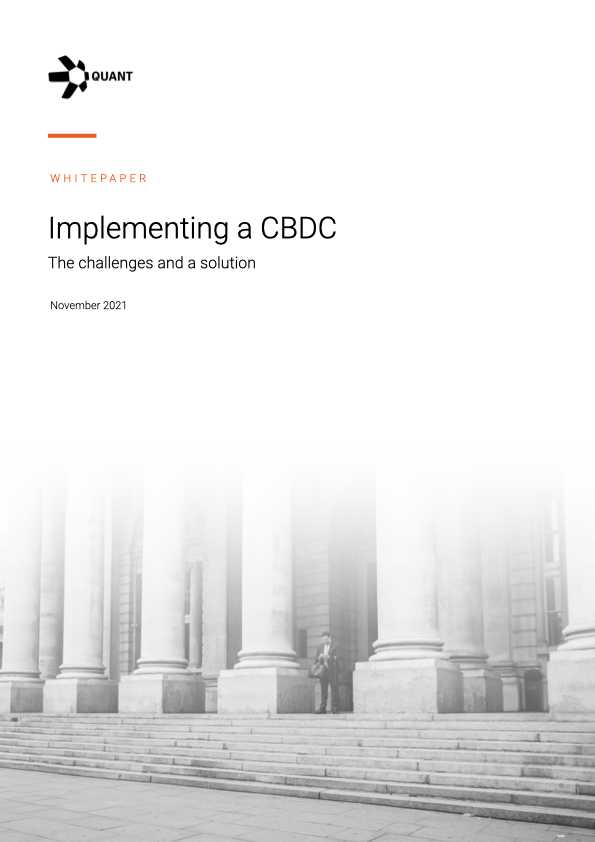